BIG Vs OpTic: a head to head analysis.

I’d like to briefly thank @mattys_gaming for creating a visualisation of all historical veto and win percentage information for each team attending the Major, from which much of the following information is sourced.

Owen “smooya” Butterfield was confident in his team’s ability to make top eight at this major, claiming previously his side would breeze through the first two stages winning six maps, and dropping two. The German side has had a more turbulent experience in the first stage; they find themselves at round five with a two win and two loss record, following close losses to Vega (16-19) and compLexity (12-16).

BIG’s final match in the main qualifier is Danish side OpTic, one of the stronger teams in the fifth stage. The teams have never played each other head to head, but I’ll take a look at how the veto will most likely pan out, and how the two teams face up on the expected maps.

With the best-of-three set to be vetoed on the traditional process, two bans, two picks, one ban, and one final pick in an A-B-A-B-A-A-B pattern. On a team’s map pick, the opposing team will decide the side they start on, with the team in the B position in the pick order choosing the starting side. The highest seed team, which by the Buchholz system is OpTic, will decide if they want to ban first or second.

With the current predictions we have, the first two bans will be Mirage and Cache, as they are BIG and OpTic’s respective perm bans. When we look into the past results of both teams, we can take a well-educated guess in what the picks will be. 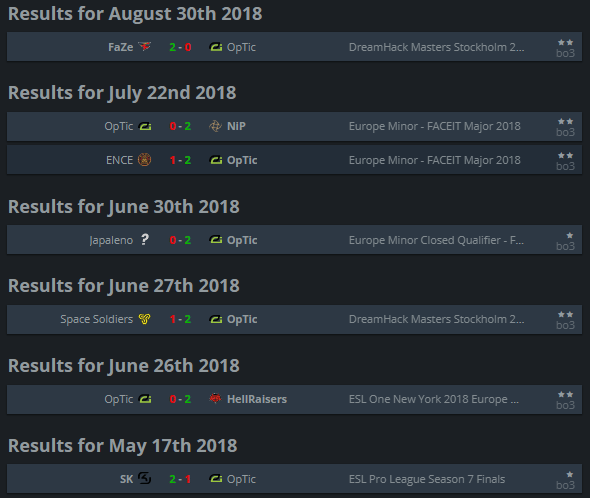 Dust 2 has been played, and lost, by OpTic in every series shown, bar the 16-1 victory against Japaleno online. (Credit: HLTV.org)

Dust 2 is shown to be an extremely exploitable weakness for OpTic, falling into the hands of a BIG clan who are more than comfortable to play it. With the Danish lineup, OpTic have failed to win a Dust 2 match on LAN, the closest match being a 16-8 loss to NiP in the European minor.

In stark contrast, BIG would consistently first pick the map against top-tier competition throughout the ESL One Cologne play-offs, and had left it as their deciding map in all three series at ESL One Belo Horizonte. The team boasts wins against Liquid, Na`Vi, NTC, a 16-1 trouncing against G2, and a close overtime loss against FaZe on the map, all at LAN.

During the major qualifier, BIG have only banned the map once, against a Renegades side that had previously beat them 16-13 in Cologne. With the disparity in results between the team, it’s safe to say that Dust2 will be played, and most likely won by the Germans and Brit.

While I can’t be nearly as confident in guessing OpTic’s first pick, there are some good indications to what they would like to play.

In a normal series, OpTic would commonly favour picking Nuke or Inferno first, while OpTic may have reservations in picking Inferno, it seems to be a favorable matchup for them to pick. The main factor being that OpTic’s most commonly played map is inferno, at 20 recorded games since May 1st, second only to BIG’s ban Mirage at 15.

BIG made much of their name on Inferno, but that spark has been somewhat extinguished since adding smooya. It would be unfair to say they aren’t comfortable on the map, seeing four wins out of nine matches played since his addition, including a close loss to smooya’s countryman Rory “dephh” Jackson’s compLexity earlier in the Major. In the same time period, OpTic have seen eight wins out of twelve games played.

With a fresh demo to watch of BIG playing, as well as the historical advantage, OpTic should feel comfortable if they do decide to play with fire on Inferno.

Both teams seem comfortable enough on their own picks, and while BIG winning on OpTic’s pick is much more likely than the inverse, this series will most likely be extended to all three maps. I can’t say with much confidence on how the final stage of the veto will go, however BIG have a fair amount of liberty in what they chose to remove.

The remaining maps match up in BIG’s favour, with Train being the only map that favours OpTic by win percentage. BIG aren’t uncomfortable on that map, but with a broad map pool it will likely either be banned or not the final pick for them.

If this veto follows, Nuke and Overpass will be the remaining maps. Nuke would logically be a fine map for BIG to play under usual circumstances, even with the team only having played twice on the map with smooya, they were both 16-8 wins. It however won’t likely see play in this major system, due to the fact playing it would allow the opposing to choose a CT side start, giving them a large advantage. If this map is however picked as the final map, it will most likely be due to OpTic picking it, being comfortable after having a fresh demo of BIG playing the map, potentially granting BIG the CT side.

The most likely map to decide the series will be Overpass. The teams look similar judging by the statistics, with fairly even win percentages in the last three months. BIG look confident on the map however, with more maps played overall on the map, and having not banned it at any stage in the major so far.

The match is set to be close, with current betting odds reflecting this too. Overall, BIG’s map pool contrasts OpTic’s in a way that gives them the edge in the series however. I’m confident in saying that Dust 2 and either Overpass or Nuke will be played in the series, two maps in the best of three that look favourable to send smooya’s side on it’s way to a promised top eight finish.

FACEIT Major: A Closer Look at Smooya and Dephh

With the FACEIT Major Challenger stage set to start today, we wanted to have a look at the UK representation in London and weigh up their chances at the tournament. This is the first major event hosted in the UK and the first that will contain UK players. So who are these players leading the UK scene forward into uncharted waters?

First is Rory ‘Dephh’ Jackson who is the entry fragger for Complexity. His humble beginnings were in the UK playing for CAZ Esports. Rory played alongside many other top UK players but stood out as a hyper-aggressive player with outstanding raw aim. Dephh began to make a name for himself online as well as offline at numerous Insomnia events. Interestingly, Dephh never managed to win Insomnia with two second places being his best placements. Rory was scouted by Complexity at the start of 2016 and moved to America where he has been living and competing ever since. Dephh has been the longest standing member of Complexity CSGO. The roster has gone through many iterations over the years with the UK import remaining as the only constant. As could be gathered by the numerous roster changes, the team have had their issues throughout Dephh’s time on the squad. They have struggled to push to the top of NA but have been on an upwards trajectory the whole time. Dephh’s first Minor was for the previous major in Boston. Unfortunately the team finished fourth and didn’t qualify for the major. The team continued to make roster changes and improve. The latest additions of Stanislaw and Shahzam from Optic Gaming improved Complexity drastically.

Complexity reached the major after winning the Americas Minor. They take on the worlds best team Astralis in their first match of the tournament, a very tough match. So how far do we expect Complexity to go in this major? It is difficult to see how the team stacks up against the best from Europe and around the world as they don’t have many recent results to go from outside of NA. With a bit of luck in the Swiss format, it wouldn’t be outrageous for Complexity to make it to the Legends Stage of the tournament. Dephh’s squad is currently playing better than ever and are a dangerous opponent for any team in the tournament. Take them lightly at your own risk! 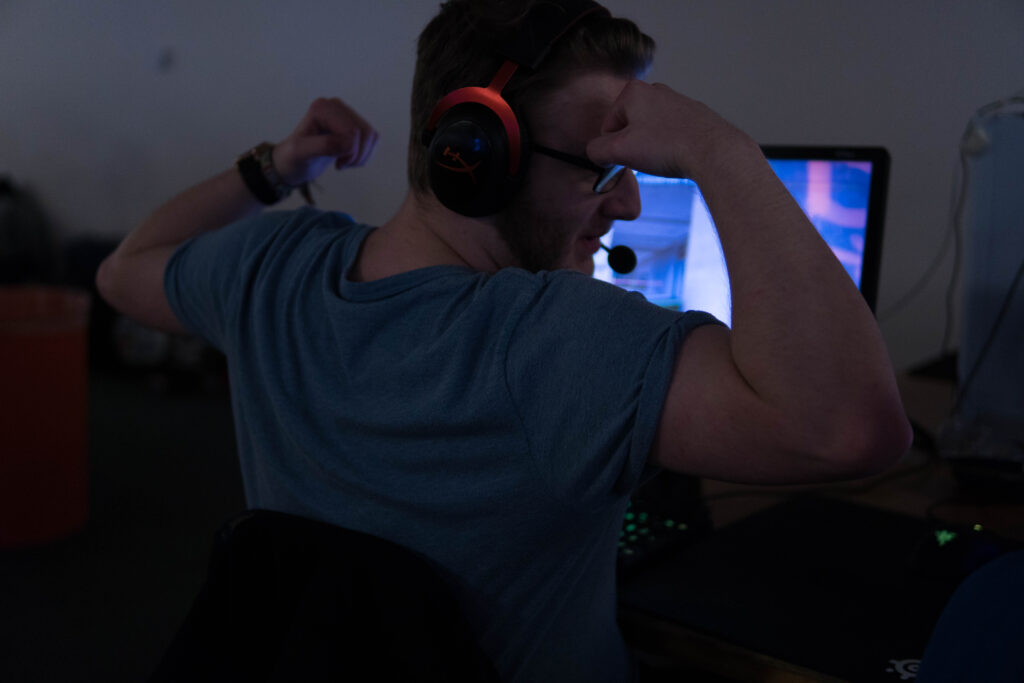 smooya is looking to make a larger impact down in London (photo: Alex “Xela” Harris)

Next up is Owen ‘Smooya’ Butterfield, main awp for BIG. Smooya has been making noise in the UK scene for some time. He started to make a name for himself by consistently having the highest RWS  of the month in Europe on ESEA. The young pug star started to compete at a high level in the UK, regularly placing well at Epic LAN and Insomnia. There was a high demand for Smooya in the UK so he spent time competing with lots of different rosters and organisations. He had short stints in Excel, Radix, CeX and finally Team Endpoint prior to leaving the UK scene behind to compete on European rosters. His first opportunity in a European team was with Epsilon for the Gfinity Elite Series. His team ended up winning in Season 1 before they got benched for Season 2. Owen spent some time inactive with Epsilon before returning to their active roster. His career was temporarily halted when Epsilon locked him into his contract by way of a large buyout fee. After his contract troubles with Epsilon were resolved, he was approached by the German lineup BIG who wanted a strong Awper. He joined the team and hasn’t looked back. Smooya seems to have settled in quickly getting good results with the squad early on. Their most notable achievement to date is their recent second place finish at ESL One Cologne. This will no doubt give them great confidence going into the major especially after getting upset wins against MIBR and Faze Clan.

BIG automatically qualified for this major by finishing in the top 16 in Atlanta. As previously mentioned, the team are hot off their strong second place finish at ESL One Cologne and dependant on how the Swiss format unfolds, should comfortably make it to the Legends Stage of the tournament. There are still tough teams that could play spoiler to BIG in the Challenger Stage such as a North squad in excellent form and the world’s number one team Astralis. Smooya’s BIG are still a young team and it is doubtful that we have seen them at their peak. They will be difficult to overcome for any team in the tournament. If they perform as well or better than they did in Cologne they could be a dark horse to win the whole thing!

Regardless of their chances on paper, both teams will have the support of the crowd in London which could have a major impact on their performance. We saw how the support of the fans impacted BIG in Cologne and who would have predicted Cloud9 to win the last major in Boston?

Be sure to keep up with our Facebook & Twitter pages to keep updated throughout the major and beyond!

FACEIT To Host Next Major In London

The second major of 2018 has just been announced with FACEIT hosting the event in London. This is the 13th major and the first one being hosted by FACEIT, it will feature a $1,000,000 prize pool and will run from the 20-23 of September in the SSE Arena, Wembley.