After six weeks of competition, regular season of the Spring 2019 ESL Premiership has concluded, and we now know the two teams headed to the Manchester Finals at the end of the month, and the four teams in the online playoffs looking for those final two spots.

But before that, ESL UK announced that the Premiership Finals will be held at the Bowlers Exhibition Centre in Manchester on March 31st. The location was initially announced back at the ESL Premiership conference at epicLAN 26, with the conference announcement hinting at a tour of the UK for the finals. ESL UK stated that the decision was “to allow for easier travel and new venues to attend to support their teams in a great live environment.” This will be the first time the event is held as an independent event on its own outside of Leicester, having previously been held as part of larger exhibitions in London (MCM Comiccon) and Birmingham (EGX).

Taking the Premiership on tour has been an ambition of ours for a while now. Up until now, we’ve based finals events either in ESL Studio One, Leicester, or various exhibition events such as MCM Comic Con London and EGX Birmingham. We felt it was time the community deserved its own standalone event and thanks to the amazing support from teams, players, fans and the hard work of the ESL UK team we’ll be presenting this season’s finals in Manchester end of March. The event will be a fantastic opportunity for the community to meet and have a great time together while celebrating the UK’s best in CS:GO and Rainbow Six Siege.

Tickets to the ESL Premiership Spring 2019 Finals are on sale now, with the one-day pass costing £9. The event is also being held on the same weekend as the Rainbow Six: Siege finals, with a weekend pass for both events available for £13.75.

Considering the last recap happened all the way back in week two (sorry about that) – here’s a quick recap of all the results that happened in weeks three, four and five to give you a sense of the position the league was in before yesterday evening. Also, for the avoidance of doubt, we’ll be using the team names they had at the time of the games, mostly due to the changes not happening until this week. For ease these will also only feature as results, with links to the ESEA match pages for each game on the map. Winners of each game are in bold.

As such, the table was left as follows at the end of week five: 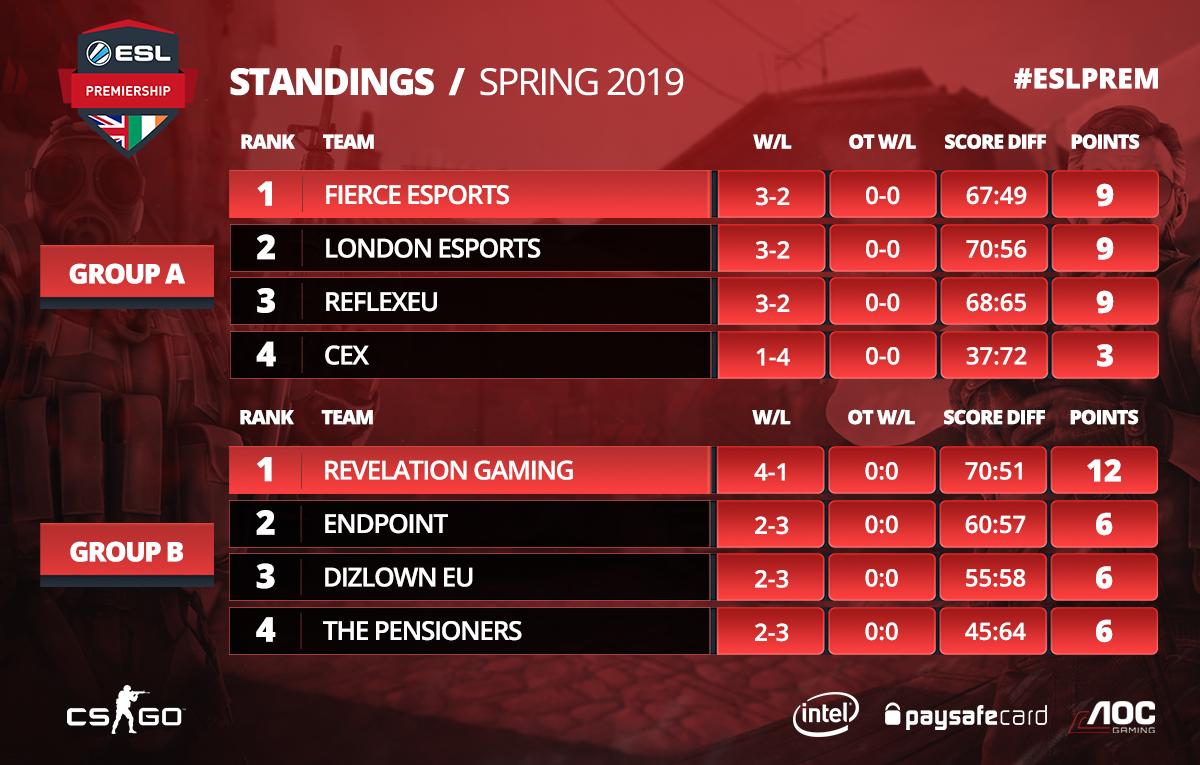 The most notable event in the series at this point was that Revelation were the first team to secure a spot in the ESL Premiership finals, having secured first place in Group B with a record no other team could beat. Fierce, London and ReflexEU (a.k.a. NEDS) were all matched in scores in Group A and had all confirmed they’d at least be in attendance in the online playoffs, with CeX sat unable to even the scores of the teams above them. That’d mean CeX were the first team headed to the relegation tournament before next season.

If you haven’t read yesterday’s roster shuffle post (why haven’t you?), here’s a quick recap on the fairly vital bits you’ll need right now: Fierce are now LFAUG, London are now Fierce, dizLown are now London, (and NEDS are now ReflexEU). Now that’s out of the way…

The first match played was the Group A tie between ReflexEU and LFAUG, where (based on the league sorting rules) a win for ReflexEU would guarantee them a spot in the offline finals, and a win for LFAUG would need them to wait until the result between London and CeX. The game was played on Mirage, and it was ReflexEU who opened the proceedings on the T-side pistol round. From there it was ReflexEU ahead for the majority, taking a 9-6 lead at the break before moving into a much closer second half. Even though it was closer, ReflexEU utilised their second pistol round win and remained ahead throughout, taking the 16-13 win on the map and secure their place in Manchester.

The league moved over to Group B next, and put Endpoint and London up against each other. It did not start well for Endpoint as it was London who went 8-0 up in the first half on Cache, before the middle of the half went between the two teams in a form of ping-pong. Even though Endpoint put London down to a force buy situation in the final round of the half, it was a three second spell where Callum “Kray” Knight surprised Endpoint and managed to secure a 11-4 lead at the break. The second half began with London winning the opening pistol, before Endpoint picked up the forcebuy and reset their opponents. From there Endpoint narrowed the gap to 7-12, but it wouldn’t be too long until London picked up another round to push forward with their lead, securing the next two rounds to reach map point. Endpoint took the next three rounds, but it wasn’t to be as London won 16-10 and secured themselves a spot in the playoffs.

It was back to Group A, and a bit of a dead-rubber match between Fierce and CeX. Fierce were only playing for seeding in the upcoming playoffs, and CeX pride as they had already been sent to relegations. In terms of rosters, it was slightly different on both sides, with Karmaw0w playing in place of Liam “Murky” Smallwood on CeX, and Tramaine “stan1ey” Stanley having replaced Alex “znx” Webster on Fierce. After picking up the pistol round on Overpass, Fierce then lost the following anti-eco to CeX and then saw their opponents claim the next three rounds to take the lead. The leads eventually switched around in that first half, with Fierce going in at the break 9-6 ahead. The second half started with Fierce taking the pistol round and the following three rounds before CeX answered back once again. But then Fierce wrapped it up and closed it all up

These results left the table as follows: 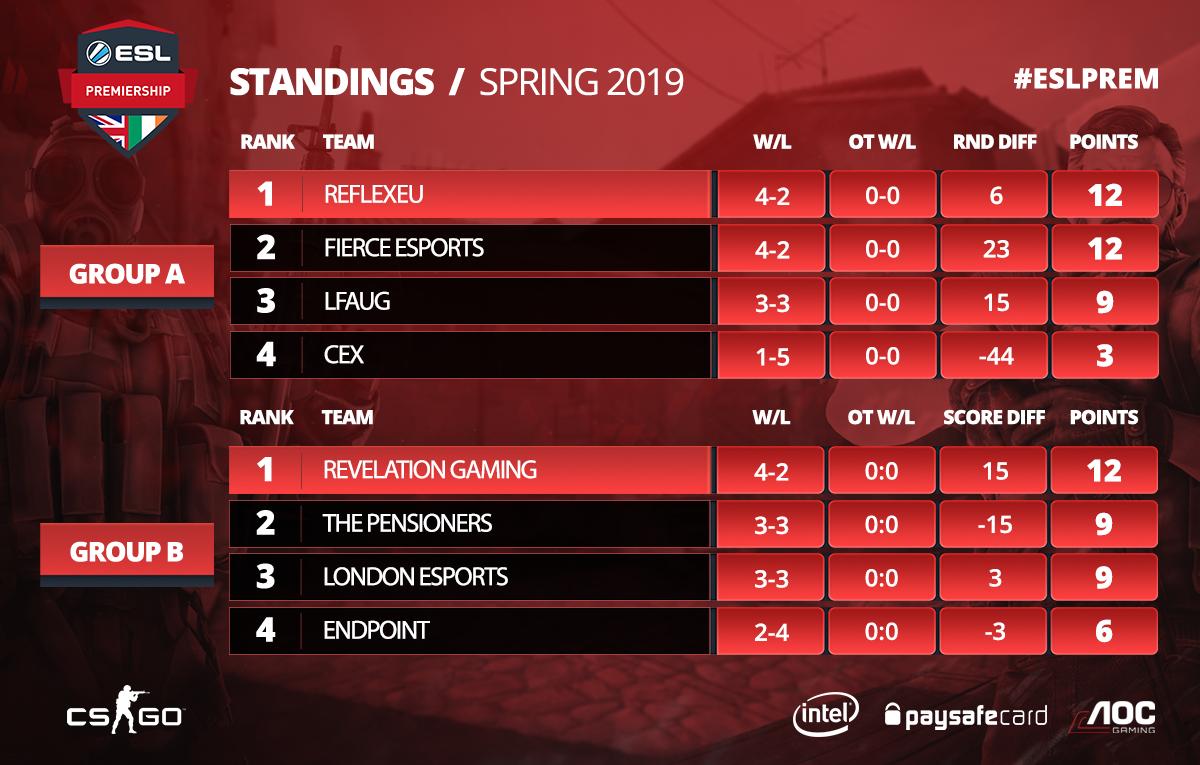 The table shows that Endpoint and CeX will be headed to next season’s relegation tournament, where they’ll have to fight to return to the ESL Premiership next season. This is the first time Endpoint have had to play in such a qualifier since entering the league in the Spring 2017 season. The playoffs will be played next week, and will be a best-of-three single-elimination knockout bracket with the two winning teams headed to the Finals at the end of the month. The match-ups for next Monday are as follows:

Fierce Esports -vs- London Esports
The Pensioners -vs- LFAUG

The games will be broadcast next Monday evening on the Twitch and Mixer channels.

Here's an in-depth look at the statistics from the final week of groups in the CS:GO #ESLPrem Spring Season!

Everything you should know about EPIC.LAN36