It is time for insomnia64 Counter-Strike tournament to begin. Once again, the iSeries admin team has opted to go with the famous Swiss group stage, which means that teams will get a set amount of games where they have to fight it out to make it to the elimination bracket. With 44 teams entering (meaning a £6,250 prize pool), it should be an action packed weekend.

The time is nearly upon us, many gamers would have set off yesterday in anticipation for an exciting weekend ahead of them. Some of the CS:GO community will be believing they can be the “next big thing” whilst others will be tired of turning up to another iSeries, going through all the delays that usually happen, and wondering why they bothered. It’s a great mix of people at an event like this and one we are incredibly excited to cover this weekend.

PhoenixUK the show that died, resurrected itself, then died again, is coming back for a special one off episode on Wednesday evening.

Today, Epsilon announced their return to CS:GO with a new European roster. The roster contains a few familiar faces with two players being from the UK. Their main goal will be to begin to compete with Europe’s best teams with the first step being a strong performance in the Mountain Dew League this season. So who will be representing the UK in the new Epsilon roster?

The first UK player who is continuing to play with Epsilon is Kia “Surreal” Man. He has been part of this lineup for some time and competed in the Mountain Dew League alongside Smooya prior to his departure to BIG. Surreal is the support player for the team, providing the assistance for other players to shine. He is very versatile and can slot in and perform well wherever the team needs him.

The other UK player in this lineup is Aaron “frei” Frei and is a new addition to the team. Aaron has been competing at a high level within the UK scene for some time but got his big break (like many UK players) in the Gfinity Elite Series. He played for Infused during both seasons. His strong performances led to a spot on the Stifmeister lineup who were later acquired by Wind and Rain. They were released by the organisation in August. This was Frei’s last team prior to signing with Epsilon. Frei is the bombsite anchor and lurker in Epsilon. He has an excellent understanding of enemies’ timing and rotations as well as being able to manage his utility superbly.

Jamie “Keita” Hall will be continuing to help the team improve and refine their game as coach.

The full Epsilon lineup is as follows:

So there you have it! #EpsiCSGO is complete.

Join us in wishing them the best of luck in their time with us. pic.twitter.com/gvYjxoN8Th

We are now half way through the Swiss format group stage at Insomnia63. Three rounds of matches have been played with some high quality ties especially in the third round. The first round of matches were fairly routine and saw no upsets of note.

All the scores for round 1 are as follows: 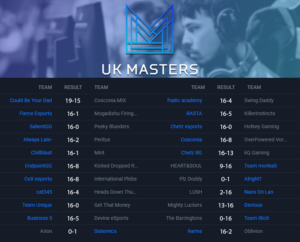 Round One of the Swiss Bracket (Credit: UK Masters / Michael Moriarty)

Once again, round 2 saw results go as a betting man would predict. The most exciting match up came with Business 5 taking on Team monkaS. The business 5 squad (Kioshima, Boaster, Surreal, Kryptix and CRUC1AL) were pushed close by Team monkaS containing UK up and comer Leaf but ultimately edged out the match 16:13. CeX also beat Rasta 16-8 to maintain their unbeaten record.

All the scores for round 2 are as follows: 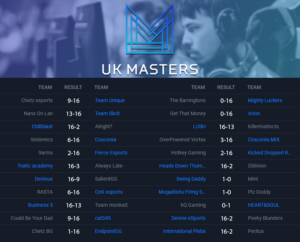 As the teams are separated by the Swiss format, we got some more competitive match-ups in round 3. Business 5 didn’t look phased by their shaky round 2 performance pulling out a 16-2 win over CeX. Fnatic Academy also had a close match on Train against Fierce Esports edging out the match 16-13. We also got to see our first overtime of the tournament with Peritus beating KillerInstincts 22-18. Mogadishu Firing Squad, Mint and Oblivion were awarded forfeit wins in this round. The teams undefeated to this point are Fnatic Academy, Cat345, Business 5, Devious, Endpoint and Team Unique.

All the scores for round 3 are as follows: 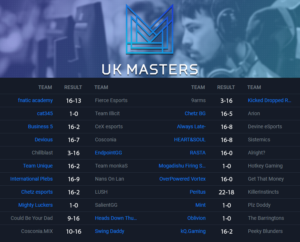 We will release another update today once the group stage has concluded so keep an eye out for it to stay up to date with the action at i63! However the UK Masters Twitter account has released the standings.

Also, be sure to keep up with our Facebook & Twitter pages for updates throughout the weekend of i63.

In our final interview in the run up to Insomnia we had a chat with Fraser ‘Frazehh’ Sollom to get his thoughts on his team, i63 and the UK scene as a whole. Frazehh is currently the main awp for CeX but has been playing for the vast majority of his life. Fraser began playing Counter Strike Source when he was 4 years old on his dad’s PC. He had an instant love for the game and played non-stop mostly on community mini game servers such as surf and jailbreak. When CS:GO was released, Fraser continued playing and got more of a passion for the core game. He started playing more competitively and honing his skills. When the UK Circuit was launched Fraser spent a lot of time playing in the UK Pro League. He became friends with his current teammates Resu and Liam and decided to make a team. The core of CeX was born. They added Nukeddog and Muffin to complete their squad and began competing.

The team saw strong results early on with a third place finish at i62. The team had a brief spell with Casa following Muffin’s departure and were runners up at Epic 24. JamesBT is the latest addition to the roster after Casa left the team and since he has joined the team seems to have gone from strength to strength on the run up to i63. The squad recently qualified for the epiclan, Grosvenor Casino LAN final as well as the OMENbyHP finals. In addition they got promoted to ESEA Advanced and are looking to qualify for the ESL Premiership when they play in the upcoming relegation tournament. As one of the stronger UK teams in the tournament they have potential to challenge for a top 8 finish or better at i63.

Can you talk me through the roles on your team?

So I’m the AWP player obviously, James is the entry fragger and just sick, Liam supports, Nukeddog lurks. Resu IGL’s and is super underrated in my opinion when he puts the time in. Sometimes our roles change from map to map like Liam lurks and stuff.

How are you feeling with the recent addition of JamesBT. Has he settled in well to your team?

We are all feeling super happy with this pickup, he’s so crisp and fits well for the entry fragger role which we needed. Also he is young and will improve a lot.

How do you fancy your chances at the event? Where are you realistically looking at placing?

I mean we’re not too sure who exactly is attending but I’m assuming there will be a good amount of EU teams, even with the prize distribution. I think we’re hoping for top 4/5.

What do you think about the Fierce Esports roster? Do you think they could cause you issues at the event?

We scrimmed them once and won pretty comfortably but they had only just picked up swaggy I believe. I’m not afraid of any UK team at the event.

Looking more generally at the event, do you like the 16 team prize distribution or would you prefer the normal 8 team pay out?

Is that for selfish reasons or do you think a more exclusive prize pool could bring other benefits?

I just don’t think you deserve to be in the money for finishing almost last in the elimination stage. Also more rewards for winning teams.

With the increased prize pool what do you think about the state of the UK scene? Do you think the complaint “there’s not enough investment in the scene” is still justified?

I don’t think that is justified, I feel like if they reorganised the prize distribution it would definitely be more competitive.

If investment in the scene is no longer an issue, how do you think UK teams could improve to be competitive in EU?

I feel like a problem with some UK teams is they don’t play enough outside of prac (I know my team is the same). Other than that, spend time watching demos and focusing on themselves as well.

Shout to Revilo for being amazing and the best manager/owner, all my teammates for being the best as well as being some of my best friends, CeX obviously, and thanks for the interview 😀 See you at LAN <3

The CeX lineup is as follows:

We will be covering the whole event throughtout the weekend so be sure to keep up to date with insomnia63 via our Facebook & Twitter pages.

Following on from the previous interview with old timers CbYd, we’ve now looked to a younger team, with a mark to make on the event. We spoke to Kyle “Swaggy” Wilson, the newest member of the Fierce esports lineup. The roster he is now representing is no stranger to the scene, previously playing under the tag Royals in the highest level of UK competition.

As epic24 is underway, we have managed to get the GOTVs from the admin team at Kettering Conference Centre.