CeX has undergone a major change since it’s 7-8th finish at the recent epicLAN 27.

ManHo “Mrhui” Hui announced today that he is no longer with the CeX roster. The 20-year old rifler tweeted the following:

No longer with @CeXesports, I’m very grateful for the opportunity and the events they sent us to, will update on whats happening in the future x

This leaves the CeX roster into some uncertainty as there has not been a formal announcement nor a replacement. Although, Liam “Murky” Smallwood tweeted that the team is looking for one to replace “MrHui”. When the team has announced the replacement, this article will be updated.

Me and the @CeXesports lads are LF1 after the departure of hui, looking for a rifler who is dedicated and wants to win as a team. DM me for more information. RT’s appreciated.

The team began well on Friday, finishing 5-2, second in the group. They lost to Legion Gaming and fish123, the latter being the winners of the event. To view, a full breakdown of the group stages click here.

On Saturday, CeX defeated Operation Aesthetics but then lost to Demise in the lower consolidation 2 round.

Therefore, the CeX roster did not manage to walk away with any prize money from epicLAN 27. A full recap of the prizes and final placements from epicLAN 27 can be viewed here.

However, the team has shown to be extremely consistent, as CeX managed to win seven out of their ten games, showing some great performances in some. The team does still have the potential to be contenders for a championship once more.

Owen “smooya” Butterfield led his teammates to victory after a decisive final match against Buzzkill Esports. This means that fish123 will walk away with £2250 + five tickets to epicLAN 28. For more information on this match, click here to view a recap from UKCSGO.com contributor Michael Moriarty.

Last night the Spring 2019 Relegation tournament for the ESL Premiership concluded, and saw the final two spots for the next ESL Premiership season filled. If you missed the first day recap, you can find it here.

The Grosvenor Casinos / epicLAN championship is well under way for a second season following London Esports’ victory in the inaugural season. The tournament features the best teams in the UK fighting for their share of the £10,000 prize pool.

After six weeks of competition, regular season of the Spring 2019 ESL Premiership has concluded, and we now know the two teams headed to the Manchester Finals at the end of the month, and the four teams in the online playoffs looking for those final two spots.

epic26 is over, and we have our final standings. THE LDN SLAYERS have become the champions and head home with the £2700 top prize.

I realise we’ve been slacking a bit here. In the time since our last coverage of the ESL Premiership , an entire season began and finished with a new champion crowned… Whoops. Before we get into the new season, here’s a video ESL UK have prepared to fill us in from what we’ve missed from last season, where London Esports lifted the trophy:

Now we’re all up to speed on last season’s going’s on – we begin with this season. This time, the league has shrunk slightly to be filled with just eight teams split into two groups of four. It didn’t all shrink as the prize pool still sits at a nice looking £13,000, with £5,500 an a qualification spot to ESEA MDL Season 31 relegation tournament for the first placed team. As with last season, the top two teams from each group directly qualify for the finals, with the next two placing teams fight to join them in an online playoff.

This season’s eight teams feature the top four teams from last season, London Esports, Team Endpoint, CeX and dizLown EU (Orgles5) and the four successful teams from the relegation tournament, Fierce Esports, NEDS, The Pensioners and Revelation Gaming. The teams were evenly split into the two groups, with two teams from the returning bracket being lined up against two qualifying teams.

With match days on Monday, the first week of competition saw CeX kick off Group A with a 16-8 Inferno win over NEDS, with Revelation Gaming following up by commencing Group B with a shock 16-9 Dust 2 win over Team Endpoint. The action returned to Group A as reigning champions London Esports began their season with a 16-6 Mirage win over Fierce, before dizLown EU concluded the evening with a strong 16-4 win over The Pensioners on Mirage.

Week two began with the title holders London Esports having to force a comeback against NEDS to eventually win 16-12 on Mirage, keeping them at the top of the table. The next two results were quick and fast matches, with Team Endpoint demolishing The Pensioners 16-2 on Inferno before Fierce secured the same scoreline against CeX on Nuke. The final game of the week was a close one, but saw Revelation remain at the top of Group B with a 16-13 win over dizLown EU on Dust 2.

This leaves the table looking as follows: 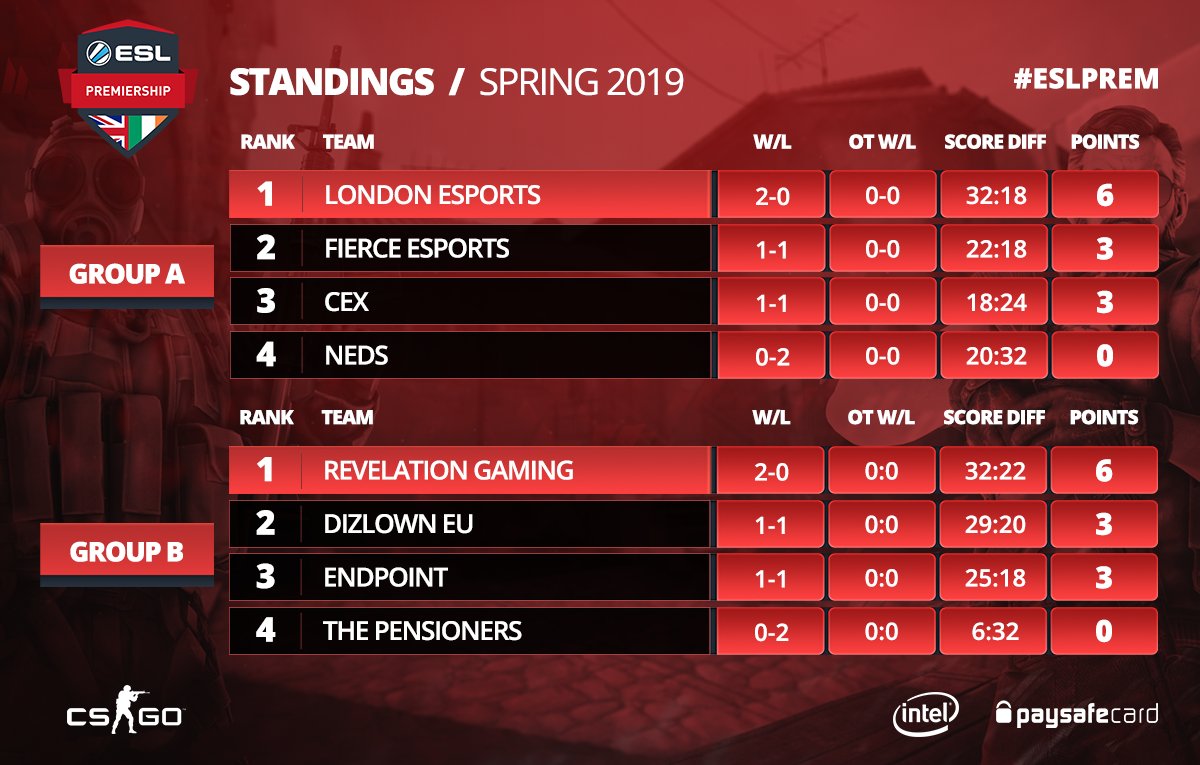 With that, next week’s matches are scheduled as follows:

The ESL Premiership Spring 2019 Season returns next Monday, February 11th at 7:00 PM for the third week of action, where the online league will reach its midpoint. The action can be caught live over on either Twitch.tv or Mixer.com.