With the second season of the Gfinity Elite Series CSGO tournament coming up this Saturday, the rosters for the UK-based competition have been released by the organisers. There have been some drastic changes to rosters in the build-up to this season, most surprisingly of which is last seasons winners, Epsilon, choosing to switch out their entire team despite a dominant season one. Epsilon’s roster is also missing three other players currently under contract, including Owen “smooya” Butterfield, who won’t be able to compete this season.

Last week, we revealed that Reason Gaming faced a suspension and possible ban after allegations of match fixing. As of 15th September, ESL UK have lifted the provisional suspension of Reason Gaming, allowing both them and Radix Esports to attend the LAN final.

All of this means that the table as of the final week of the season, is confirmed to be kept the same. This will see CeX, Reason Gaming, Team Endpoint and Radix Esports pick up the invites for the ESL Premiership Finals, with Method and fish123 once again missing out on competing.

The final standings of the online league of the ESL Premiership.

Esports Integrity Commissioner Ian Smith said, “ESIC would not usually comment on investigations, but, in this case, unfortunately, details were put into the public domain and, in the interests of natural justice and protecting the reputations of those involved, it is only right that we clarify what has happened. Preliminary evidence justified provisional suspension given the stage of the Premiership that had been reached and the time pressures involved. These pressures also prompted us to expedite the further investigation of the allegations, which we did as quickly as possible. The result of those further investigations is that we are satisfied that underperformance by the Reason Gaming team in their match against Radix was not deliberate as originally alleged. Consequently, we have lifted the suspension at the earliest opportunity.”

The ESL Premiership finals will be held at the 5,000 m² ESL Arena at EGX over the weekend of 23rd-24th September. The semi-finals are scheduled for 10am and 1:30pm on the Saturday with the finals set for a midday broadcast on the Sunday where the final two teams will compete for the lion’s share of the £10,500 prize pool.

News breaking over Monday indicated that controversy was afoot. Owen “smooya” Butterfield kicked off with tweeting about Reason Gaming being banned from the ESL Premiership. This stemmed from an email sent by Ian Smith, Integrity Commissioner of ESIC, to the five players of Reason Gaming entitled “Notice of Charge, Plea Bargain and Provisional Suspension – Match manipulation ESL Premiership – Team Reason“.

Gfinity have revealed the first four organisations to fill the spots in their new Elite Series. These four UK based organisations have been given ground floor access to what is set out to the be proving ground for UK players who want to push their gameplay to the next level. Alongside Counter Stike:Global Offensive, Rocket League and Street Fighter V will be part of the Elite Series giving a wide spread of gaming genres.

After announcing their return to the UK CS:GO scene at the end of 2016 with what was planned to be a stable roster, things changed rather quickly for the side in Red. With holidays for some of the players and others leaving the team, the first couple months weren’t as easy as predicted. Now, with players back they’re looking to get back on track.

First off, in news that’s been a long time coming, Miran “SpeedyG” Hoyle, Tom “vertiGo” Rockcliffe and Mitchell “m1tch1” Richards have all been removed from the team for a variety of reasons. This led the remaining two players, Bradley”Hoodlum” Ratcliff and Dudley “dudley” Morris to, after returning from their holidays, to come in and trial players.

This leads a familiar name to return to Reason Gaming, as alumni and former CeX player Scott “kARMApangYa” Campbell joins the roster after being out of competitive CS:GO. The final two members of the squad are two players who have been played together before on numerous teams, most recently being the last uFrag roster, as Harry “Pommey” Crawford and Calum “Kray” Knight link-up to fill out the roster.

With the squad not currently competing in any of the online UK leagues, nor ESEA, after turning down their UKGT invitation, they have a lot of preparation time for upcoming LAN events including Multiplay i60 in April.

The new Reason Gaming roster is:

Just shy of a day before we publish a piece outlining the major story lines,  congestions and overall mayhem that is January 2017, it appears a new, or rather historic, organisation has made its arrival back on the soil of UK Counter-Strike.

Depending on how you look at this, it will grant you two separate angles. One side sways us to the prestigious name of Reason Gaming. A quick foray down the looking glass will highlight presence across the board in most things UKCS. In short,  an organisation capable to sit comfortably in the top echelons of UK Counter-Strike amongst Infused, FM Esports and Endpoint, to name a few. 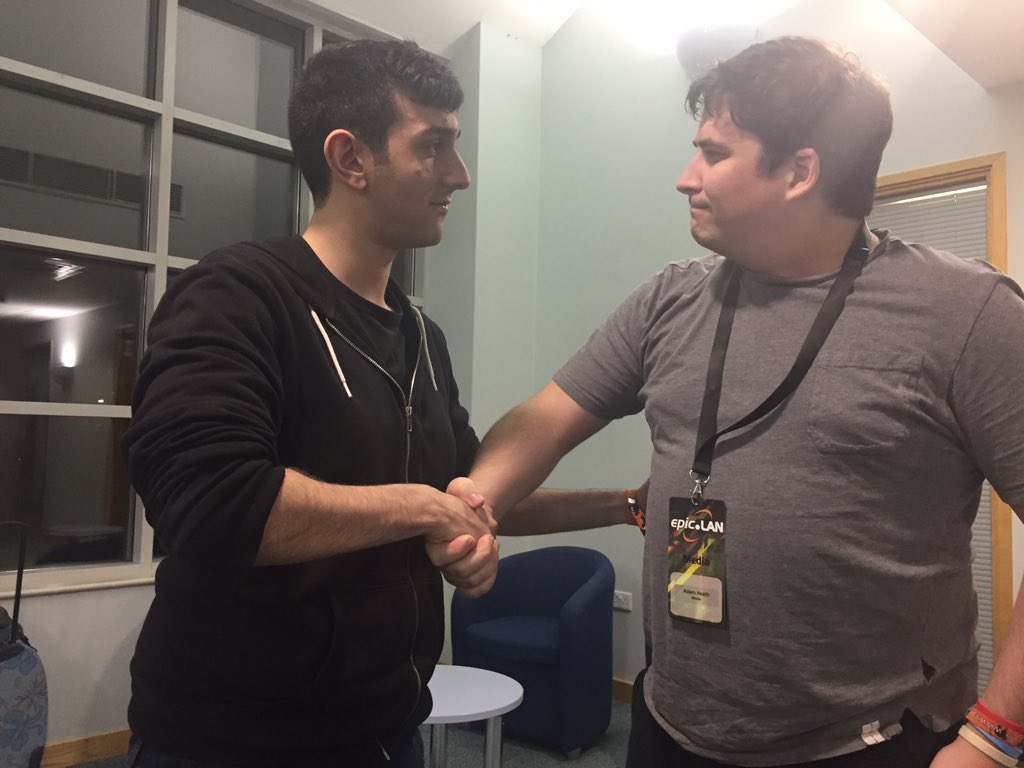 An agreement between SpeedyG and Blanks formed many LANs ago has moved into the present day, as the two join forces once more.

On the flip-side you’re greeted with a platter of players, all with various merits and experience for themselves. However, it can’t help to be said there is a mysterious element to this line-up, as the mixture of players certainly aren’t ones we’d conjure up in a theory session on UK teams suffice to say.

So, let’s take a quick recap. We’ve mentioned the ability for an organisation such as Reason to house a team, comfortably too, within the top tier of this domestic scene, yet we’re struck by the idea of this line-up not exactly being something you’d expect out of the box.

By far the best way to gain insight on the thoughts behind this is to speak to the man himself, Adam “Blanks” Heath.

It’s great to be back with a solid roster in the UK CS:GO scene. The end of 2016 was a bit of a mess, something that was completely avoidable, had the communication been in place. That’s why, when talking to SpeedyG about this new roster, I was involved in every step of process. SpeedyG and I have known each other for a long time, and so this team has a lot of trust in its foundations. Being able to trust the judgement of someone, while also have them rely on your feedback when looking at players is a great step forward in creating a team that works.

The day started off with MnM Gaming in full control as they picked up early rounds and looked to be unstoppable.  Before too long MnM had two maps under their belt and looked strong enough to take the series with a straight 4-0.

Next Friday, 2 teams will descend on London’s MCM Comic-Con to play the finals of the ESL UK Premiership, The 3 week group stage is finished and we were left with 2 teams who have proved their dominance over the games they have played throughout the past weeks.

Originally known as Heinz.UK, the Molotovs and Marshmallows side led by Coach and Manager Neil “Neil_M” Murphy have destroyed the competition throughout the Promotions cup and the Group stage, not dropping a single map throughout the competition, beating teams such as XENEX, nerdRage and FM eSports in clean 2-0’s. They’re heavy favorites coming into MCM London but recent travel to China may leave the team fatigued and vulnerable.

The team consists of:

(We previously reported robiin and tsack would be playing for the team, we recieved word quickly after publishing that those 2 players had been changed for the 2 now mentioned above)

Placing second in the group is Reason Gaming who played through the ESL Premiership as Vexstar. They too did not drop a single map throughout the tournament except for one Bo5 which went 3-0 to our other finalist team – MnM. A bad omen for the side maybe? Reason Gaming have however now had chance to go over demos from MnM so should be prepared for them when the time comes next Friday.

The matchup even has a little bit of a rivalry behind it, as Reason Gaming earlier on were set on picking up the Heinz.UK squad, only for them to back out after everything had been announced. Now that Reason Gaming have another squad, it’s their chance for both the org and the team to take revenge for the 3-0 that MnM Gaming handed them earlier in the season.

The venue will be MCM Comic-con London, the 3 day event taking place in the Excel London will host the ESL Premiership on Friday the 28th of October. A single Best of 5 Series will take place between the two teams to settle the prize money of £6000, £5000 will go to the winner with £1000 going to 2nd place. All the action can be found on ESL Twitch channel on Friday the 28th October!

You can see how the Premiership played out HERE, and check out the ESL_CSGO_UK twitch page next friday, October 28th, for the final!

After ESL’s UK Premiership Group Stage for 2016 to qualify for the finals played live at MCM London Ex-Vexstar (now Reason Gaming) take the win and move onto the live finals at MCM London. Following the qualification through the group stages to the live event of which the team will play against MnM Gaming (Molotovs n Marshmallows) competing for the £6,000 prize pool which will be played out on October 28th.

The team’s confrontation against Fish123 on Monday ended in a swift 2-0. The two maps played out were Dust 2 & Cache, on the first map the half finished 11:4 in favour of Reason with Fish123 to pick up a series of rounds with a potential of a comeback but to be shortly shut down by Reason Gaming taking the first map 16:11. Moving onto Cache it was do or die for Fish123 with no lifeline & no second chances, they would have to close out Cache followed by Mirage. Kicking off the map Reason rocket through the first half ending it 11:4 as the previous map, cruising onto the second half only letting 3 rounds slip, Reason claim their spot at MCM London for the live finals.

Here’s what Owner of Reason Gaming, Adam “Blanks” Heath had to say about the move;

If I was to sum this EPS season up in one word, it would be “confusing”. We started off the season with a very keen team who wanted to talk about other events, both domestic and international, and somewhere along the lines ended up with a team that were playing in four different tournaments under four different names. It’s probably the most extreme UK scene cliché that I’ve ever seen. It’s a shame things didn’t work out with the roster as I have great respect for some of the players in the team and looked forward to working with them, but some things just aren’t meant to be. That being said, who wouldn’t walk over burning coals to work with some of the names in this lineup! I’m very happy that we managed to come to an agreement with Vexstar to represent us at MCM Comic Con London, and I have made it clear that should this mix transform into a team, that the door is open for them to stay under the Reason banner.

The lineup which will be representing Reason MCM London consists of;

For more information on MCM London visit their website here.