The Summer season of the ESL Premiership started with a bang as the opening wave of matches have been completed.

Kicking off the night, Fierce Esports faced London Esports in their opening match of the season. Fierce held strong to secure a 16-8 victory to hand London their first loss of the Summer season.

Next would be the Royals taking on a new-look Buzzkill Esports roster. In what was a highly competitive map, it was the Royals who grabbed a 16-12 win.

The third game of the evening would see reigning champions, The Pensioners, begin their campaign against ReflexEU. Starting from where they left off from their Spring championship victory, The Pensioners managed to take Overpass 16-7.

Rounding off the evening, Team Endpoint did battle against Lithuanian side, Wind and Rain. The UK stalwarts held strong, taking Mirage 16-9 to begin their season with a win. 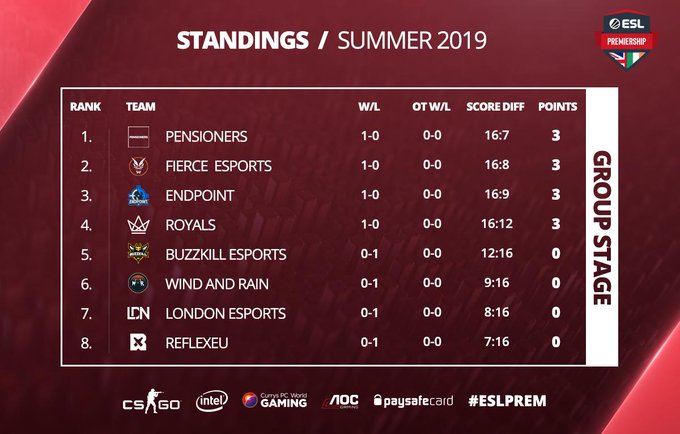 After a week of competition, it is still all to play for. The second week of the ESL Premiership returns on the 20th of May where the undefeated Endpoint and Fierce compete for a chance at the top spot.

Keep up to date with all things UK CSGO via the UKCSGO.com Twitter