Vexed have today announced the long awaited changes to their CS:GO lineup, which were expected after British player Charlie “pickles” Pickles and Norwegian Erik “truth” Hansen Dyrnes left the team at the start of August, meaning they were down to three players and as such were not in attendance at the recent Insomnia 63 event.

ESL Announce the Clash of Nations

The current champions of each regional ESL Premiership will head to the Madrid Gaming Experience from the 27th to 28th of October, for the ESL Clash of Nations. They will meet the 1st and 2nd ranked team in the current season of ESL Master España, for their chance to shine on the Madrid main stage during the Swiss style tournament.

The wait is over! ESL have released information surrounding the ESL UK Premiership Autumn season. Much to the delight of last season’s high placers, the top 4 teams will be invited back to take part in the Autumn Season. The invite will be offered to teams that still have 3 or more of the same players even if the organisation they play for has changed. This leaves 4 spots open which will be filled by the top 2 teams in 2 qualifiers which will take place at the end of this month, and the start of next. Should any team not accept their invite back into the ESL Premiership, then there will be playoffs between 3rd place of the two qualifiers.

Below is the full press release from ESL UK about the Autumn Season.

The ESL Premiership is back for it’s Autumn season, with teams competing for £21,000 of prize money across Counter-Strike: Global Offensive and League of Legends, with the coveted Challenger Series Qualifier spot available for our League of Legends Champions.

Last time out we saw the best 8 teams battling it out across seven weeks of group stages across both titles.

Team Xenex took a commanding lead over 7 weeks in League of Legends, only dropping a single game to eventual 3rd placed exceL eSports, and were joined in the live final by 2016 winter champions MnM Gaming.

Both teams clashed on the Rift in a best-of-five format and MnM Gaming showed their true colours after a difficult group stage to take the title 3-0 and earning themselves a spot in the Challenger Series Qualifiers.

While they weren’t able to progress through to the Challenger series, they did the UK and Ireland proud!

Meanwhile in CS:GO, FM esports dominated the early weeks of the season before a 1-1 draw to excel and The Imperial gave hope to those teams around them. However they picked up the form for the latter part of the season and secured their place in the offline finals.

Going into the final week Fish123 led exceL eSports but needed to pick up a map against FM to secure their place at finals. FM dominated and that left exceL requiring a 2-0 win against bottom of the table ROYALS UK to make it to finals but they floundered on dust, dropping the map 16-11 and securing Fish123 the 2nd finals spot.

FM continued to look strong picking up the first map and clawing back for an overtime win to secure the 2nd map on Mirage. Fish123, who had been picked up by MnM Gaming for the finals, brought it back to 2-1 with a victory on Overpass before FM reasserted their dominance with a quick victory on Cobblestone, taking home the Premiership title.

For the remaining four spots we will be holding open qualifiers on June 26th/27th and 3rd/4th July for CS:GO and June 28th/29th and July 5th/6th for League of Legends to give everyone the chance to join the Premiership!

If you do well enough on Day 1 you’ll automatically progress through to Day 2 and the top two teams from each cup will advance to the group stage!

The group stage will run as a round robin format starting on Monday 17th of July for CS:GO and Wednesday 19th for League of Legends at 7pm and you can join us on twitch! All teams will be playing on a single night in a best-of-1 format across 7 weeks running until 30th August.

The playoffs will begin on the 4th/6th of September with two best-of-3s played between our top 4 teams to determine who will join us at our live finals in mid-September!

The qualified teams for The ESL Premiership

After an extended qualifier set, the teams for the 2017 Spring Season of the ESL Premiership have been confirmed. The qualifier kicked off with 72 teams in a Swiss-format qualifier. Sixteen teams were then in a double-elimination bracket to determine who were to qualify.

Last night the ESL UK Spring 2016 CS:GO Qualifier #1 concluded after starting with 124 teams who entered to have a shot at becoming one of the top teams in UK Counter-Strike. For those of you that are unaware, this is where the teams begin their quest for success and is usually referred to as the most exciting part of the entire ESL season as we see the teams refined and tested to the best of their abilities in hope to receive a hefty £10,500 in prize money by the end of the season.

In the round of 128, we saw many familiar faces who did not fail to entertain with Molotovs and Marshmallows smashing Team Wave 16:0 and other teams also providing a good show with the likes of HSFactory dominating Team 2 0 0 2 with a scoreline of 16:1 respectively. In the next round things started to become much closer as the higher seed teams came into play. NerdRage.pro came into the qualifier with a slow start but unsurprisingly saw through a victory against Team Penguin Overlords sealing their place in the next round. Along with them uFrag advanced, who have been previously displaying some promising Counter-Strike even against the best of teams. Despite their not so dominating 16:11 win they still comfortably progressed and drew the gap closer to the final for the team which may of perhaps quaked some of the higher teams according to Tom “VertiGo” Rockliffe who claimed beforehand that some participants were merely scared of his team.

This whittled down the qualifying teams to just 16 and again some interesting results arose. The FM-eSports community took a fast exit from the qualifier with a 16:8 loss against nerdRage.pro. Nonetheless, they still showed some great Counter-Strike and will hopefully bounce back in the next one. A not so well-known team, under the alias of G-Pros managed to take one step closer to the final when they managed to acquire a default win quite late into the bracket. However, this is most likely down to their less gifted of opponents/brackets which saw them all the way into the quarter-finals where they met their match against nerdRage. Still a noteworthy run through the qualifier and good to see some different talent make it into the later stages. On the other hand, uFrag unfortunately lost deeming “VertiGo” ‘s statement void as we saw them take a thrashing themselves from Enraged eSports 16:3 on de_overpass. The Working Men were also beaten by James “fisher” Fisher’s mix team, Sex, denying them an opportunity to seize the cup. The notorious Sam “RattlesnK” Gawn and Fabien “KioShiMa” Fiey made an appearance under Team lol and made it all the way to the semi-finals before a close loss against nerdRage ending 16:13.

In the end it boiled down to the two titans of the 1st qualifier – Team Sex vs nerdRage. This was a real “edge of your seat” finale and a tough BO3 for both sides which went through all 3 maps and one overtime, ending on de_mirage. Here we saw team Sex take the final victory and finish the games 2:1 which means they claim the first qualification spot in the spring ESL UK Premiership season.

Throughout the qualifier there were some strong performances which leaves the door open for another exciting qualifier, and a great spring season.

GLG to Round up ESL UK Premiership

For a while now there has been hot debate about which of the remaining UK sides deserved the final invite slot to the ESL UK Premiership after exceL eSports scooped up the seventh spot last week. Popular choices included the newly adopted CAZ eSports and The Last Resort, however rumours have now been put to rest after ESL UK yesterday confirmed that GLG would be taking the final invite to the premiership. Though having gone through numerous revisions, the GLG title has been around in Counter Strike for many years now, with faces notable for being able to cause a stir. 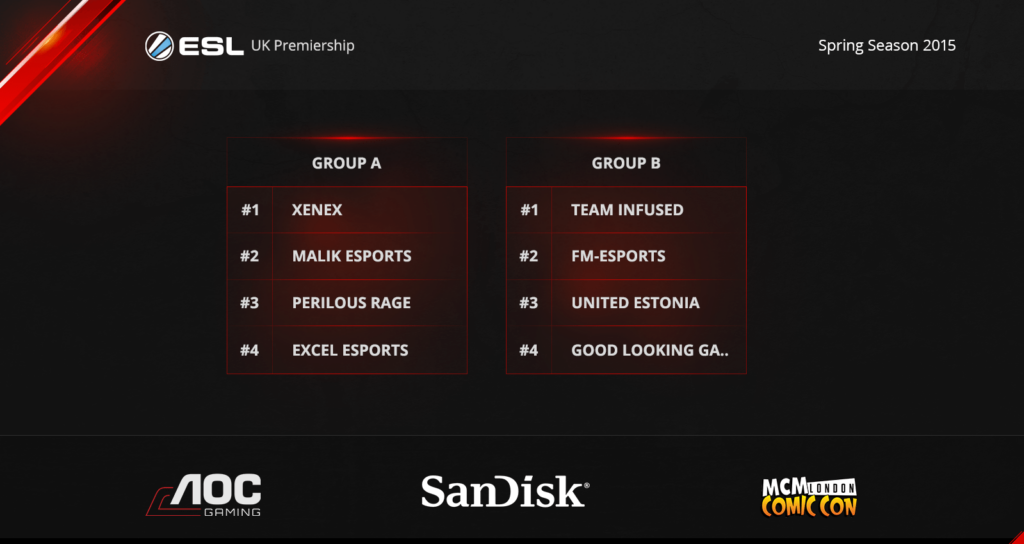 With that in mind, the group stage is set to begin this Monday the 20th of April with the start of Group A, where XENEX will be facing up against the first invited team exceL eSports, and MALIK against Perilous Rage. Keep your eyes on our match ticker for when the games go live, and feel free to join in the discussion. Keep checking back to UKCSGO.com for more ESL UK Premiership coverage, including our Group A preview to be released this coming Sunday.

The brackets can be found over on the ESL Gaming website, along with a schedule and the original announcement.