The UK Esports Awards – Powered by G Fuel are taking place this weekend at the ESL UK Studio in Leicester this Saturday, and we now have a full list of finalists, talent and sponsors. The live show will be hosted on our very own Twitch channel, which is home to our 24/7 VOD stream, but will be streaming the whole awards ceremony live from 6pm on Saturday.

Presenting the show will be Elle Osili-Wood and Ceirnan Lowe. Elle is most recently known for her work on Ginx TV hosting the daily show “The Daily Download”, but has also been on mainstream news programs such as BBC News and Sky News talking about esports. She will be joined by esports host and caster Ceirnan “Excoundrel” Lowe who is best known for his work on League of Legends and Vainglory and has a rich history in the UK esports scene. 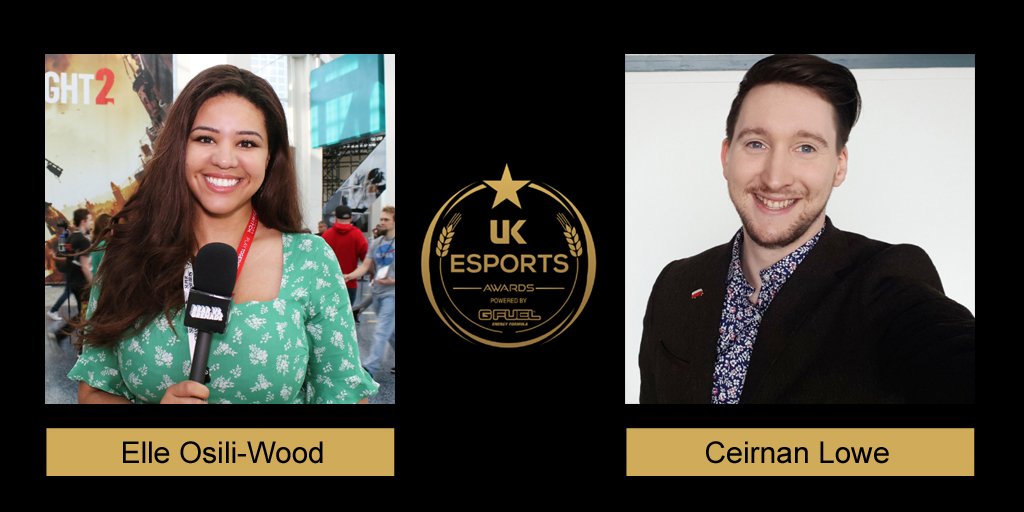 Elle and Ceirnan will be your hosts for the night

The part everyone has been waiting for. Who made it through the nomination stage and are in with a shot of winning the first ever UK Esports Award for their category? The final list of categories changed slightly due to nomination habits, we found it necessary to combine some categories like Team of the Year and Organisation of the Year, as well as Wooden Spoon and Banter of the Year. This brings the total awards down to 14 from 16, but has improved the quality of the awards overall.

The finalists in each category are:

PLAYER OF THE YEAR
SPONSORED BY AOC GAMING
This recognises a standout player with outstanding ability and promise for the future.

MANAGER OF THE YEAR
This award is for someone who has shown valuable leadership, mentorship and coaching skills within UK esports. It can be an organisation manager, owner, coach or other executive, for example.

TEAM/ORGANISATION OF THE YEAR
SPONSORED BY OVERCLOCKERS UK
Awarded to a top grassroots UK esports organisation that has demonstrated exceptional ability, a professional attitude and has made a real effort to push UK esports forwards.

CASTER OF THE YEAR
Recognises a play-by-play or colour caster for their knowledge, own unique style and ability to engage and captivate the audience, turning almost every match into an exciting esports spectacle.

PRESENTER OF THE YEAR
A good esports host can be the glue that holds an event together, and this award is for the UK scene’s best.

STREAMER OF THE YEAR
SPONSORED BY NOBLECHAIRS
This award looks to promote an entertaining UK-based gamer who engages their audience with composure and enthusiasm.

TOURNAMENT OF THE YEAR
SPONSORED BY PRESTEIGNE BROADCAST HIRE
Highlighting a stand-out event, whether online, offline or both, that was exciting to watch with outstanding presentation, organisation and memorable moments.

ADMIN OF THE YEAR
Recognising the most reliable, consistent and fair esports tournament admin/referee.

PHOTOGRAPHER OF THE YEAR
This photographer, whether in-house or freelance, has an eye for a brilliant image, and has captured an iconic moment or series of moments in UK esports.

VIDEOGRAPHER OF THE YEAR
Awarding a person with top video editing and production skills.

REPORTER OF THE YEAR
This reporter – whether a written journalist or video reporter – has given exceptional coverage to UK esports.

SERVICE PROVIDER OF THE YEAR
Highlights a business or person that provides a valuable product or service to the UK esports community.

BACKSTAGE HERO
This aims to recognise an unsung hero that doesn’t fall into the other Backstage categories listed above, for example a consistently brilliant observers or reliable member of production staff.

The decision was made to keep the finalists of the final award, Banter of the Year/Wooden Spoon Award, under wraps and only announce the winner during the live show.

Special thanks go out to all the sponsors of this event – G Fuel, Lime Distribution, AOC Gaming, Overclockers UK, noblechairs and Preseigne Broadcast Hire who have helped make this event that us and Esports News UK have worked so hard on putting together. We hope you will join us on the night in Twitch chat to watch the show unfold. It is conveniently timed to take place shortly after the England game so you should be close enough to a screen to tune in!