The CS:GO Tournament has come to a climatic close. After three full days of compelling Counter-Strike action, it finally has come to the close. We finally get to see who wins the biggest share of £5,000 with some massive shocks, and some great underdog stories once again. This LAN has capped a wonderful year of UK LAN action, and we can only look forward to the entirety of 2017 to see where CS takes us.

On Friday, teams of all skill levels can only believe that they are capable of winning, and of course this provided some incredible entertainment throughout the group stages. Whilst the groups were slightly weakened by having the top three go through to the elimination stage, it was still an enjoyable spectacle with some hard fought victories along the way. It was Team Hyph who lit up the headlines first as they seemed to be missing one incredibly valuable player to their lineup, in the form of Mr Banter King himself, Adam “ALIG” Robinson-Witts. Ever the usual iSeries attendee, he wasn’t seen on Day 1, and thus Team Hyph had to scour the entire LAN hall to find a fifth that could replace him in the group games. The search didn’t end well, as they had to settle for a player who can only be described by his CS:GO in-game rank, Single AK. 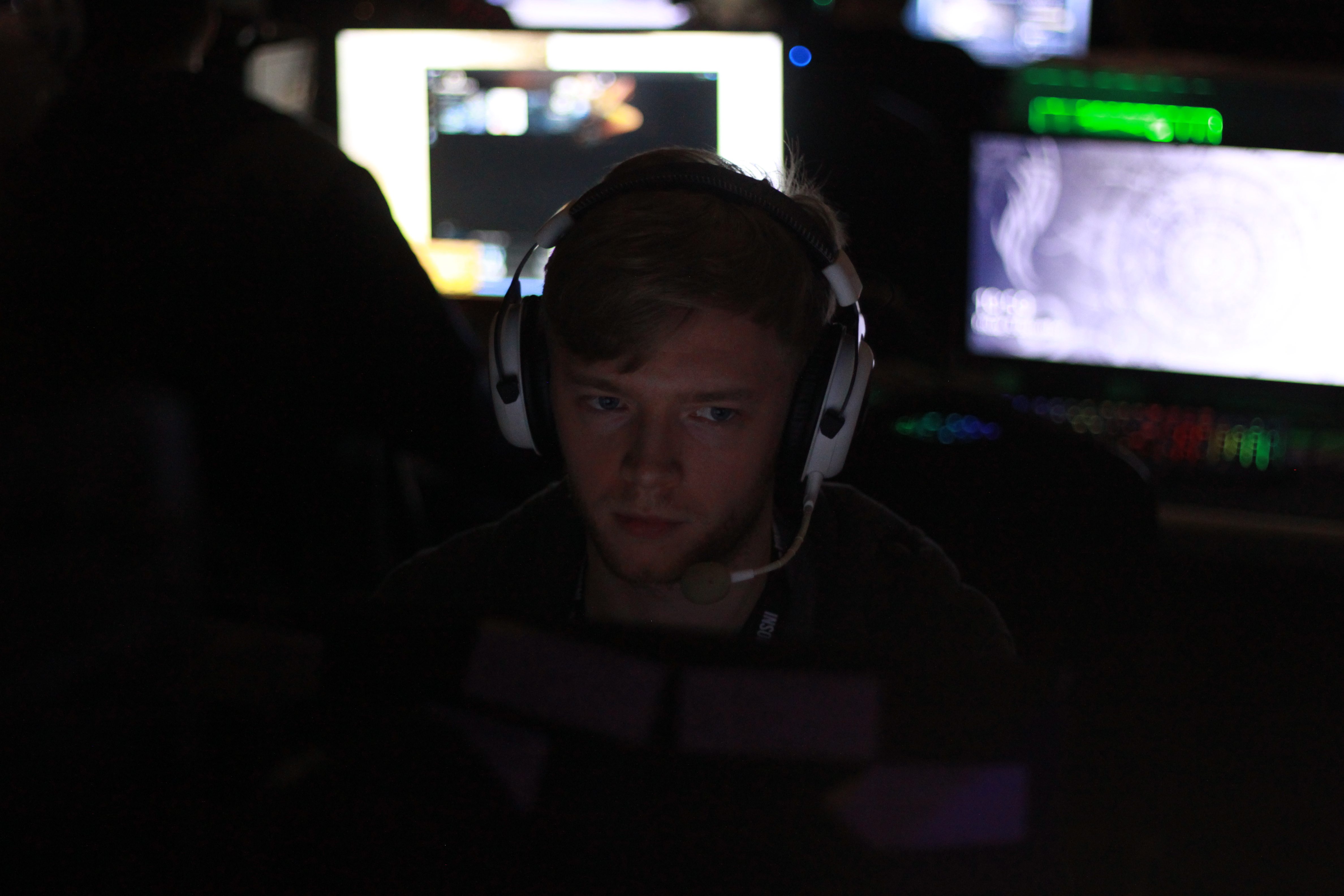 The face of a broken man 🙁

It began the incredible day with some shocks, surprises and torments. One of the bigger shocks was that Jed “HattonGames” Hatton’s HG.Red side managed to overcome epic.NINETEEN Champions, Bulldog eSports. It made the day increasingly interesting as we saw other shocks come in thick and fast. Later on in the day, Team XENEX suffered a bit of a shock to the system, and also had some rather big consequences for teams elsewhere in the groups too, as exceL eSports claimed their scalp over Shane “shaney” Smith’s team. It meant that Team XENEX ended up second in their group based on Head 2 Head & Round Difference, and meant that a certain someone’s team were given a harder route to entertain.

If that wasn’t enough for Day 1, we saw Group D become the group of Death in the competition. Featuring teams such as Miran “SpeedyG” Hoyle’s mix team, Rasta.easyG, Team uFrag, & Impusle Gaming, they all ended up in a three way tie with 12 points each. Team uFrag had beaten, Miran’s team, then Rasta beat Impulse Gaming, and then Impulse beat Team uFrag. Talk about being a story of twists and turns. Round difference came into play with these three teams which decided who they would face, it meant that Team uFrag ended up having a bit of an issue in the lower bracket where they faced up to Team XENEX later on.

Group D wasn’t the only group that ended up in a three way tie, so did Group F featuring Bulldog eSports, HG.Red & Team Viral. Again, round difference separated the teams to decide who would face who.

After some of the shocks were finally absorbed, it was time for admins to play their own shocks on the players and teams involved. Incredibly, I did really enjoy seeing how this format unfolded, because I like to see new approaches made to our LAN events in the UK. Without change, comes stagnation, and decline, with change sees new life put into the scene, LAN events and game itself. This bold format was thought up by Jon “ViciousHorizion” Kelly, who is now League Ops at Multiplay. The format was all teams head into a 24 team bracket (from groups), they played one Best-Of-Three match, the winners would move into the proper bracket, and the losers would be sent packing into the Intermediate Tournament. The following round saw Best-Of-Three double Elimination, with the UK Masters teams given byes into the Quarter Finals of the bracket. Then that was that, if you need a better break down, I would advise heading to the Elimination Bracket post Duck did for everyone. No real shocks happened in the first round, the beginnings of belief from Impulse Gaming were seen however when they overcame Tom “vertiGo” Rockliffe’s mix team, Team Hyph, in a Best-Of-Three series. 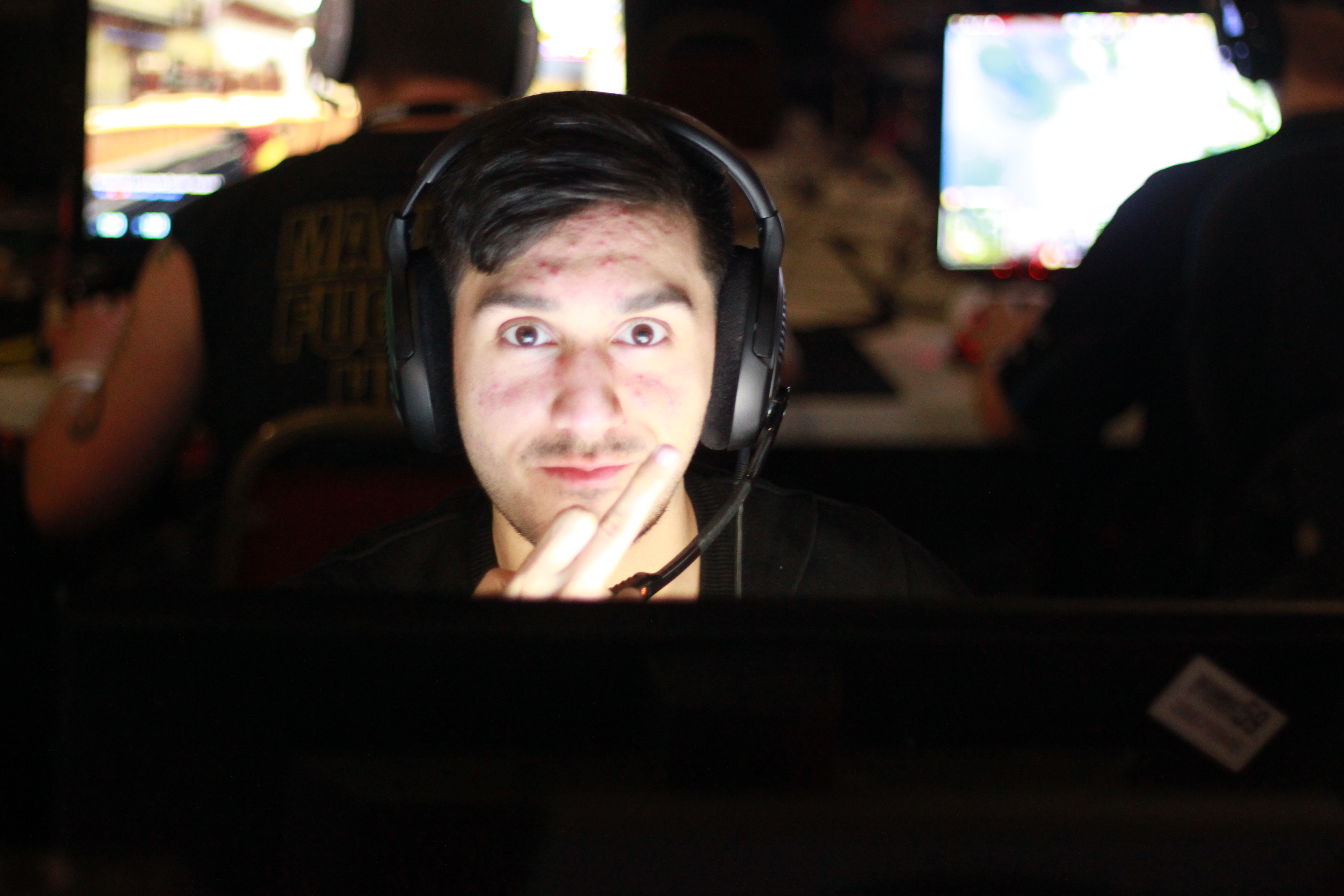 Day two saw things continue in standard fashion, teams moan about how late they stayed up till, then getting in at 10am to play more Counter-Strike (seriously folks, how long have some of you attended UK LAN events?). Dragon Esports were first ones to really surprise a few people, after being smashed by Team Endpoint in the upper bracket, they then dished out their own smashing, by seeing off Tom “quiver” Griffths side, Dog Gaming in the lower bracket. That meant it was a 9th – 12th finish for Tom and co after their spirited run at epic.NINETEEN in October. However, the boys, in the form of Ashley “ashhh” Battye & Chris “debaser” Flynn, will be asking themselves how they managed to not just lose, but get obliterated by a side such as Dragon Esports. It meant that Dragon had a rather intriguing run at insomnia59 this weekend, and finishing within the Top 8 was a great achievement to make. They unfortunately got beat by Team XENEX in the lower bracket, with another two lopsided results there.

Along with Dragon Esports, it was Impulse Gaming who really came to shine at insomnia59 this weekend, with a run into the 5th/6th position, by beating Odin over two maps, Team Giving It, over three maps, and then London Lynx over two clean maps. They met CAZ eSports, and boy did they show how resilient they were with a really really good two close map series with them. It meant that Impulse stunned the field, and have left a mark in history of iSeries events. 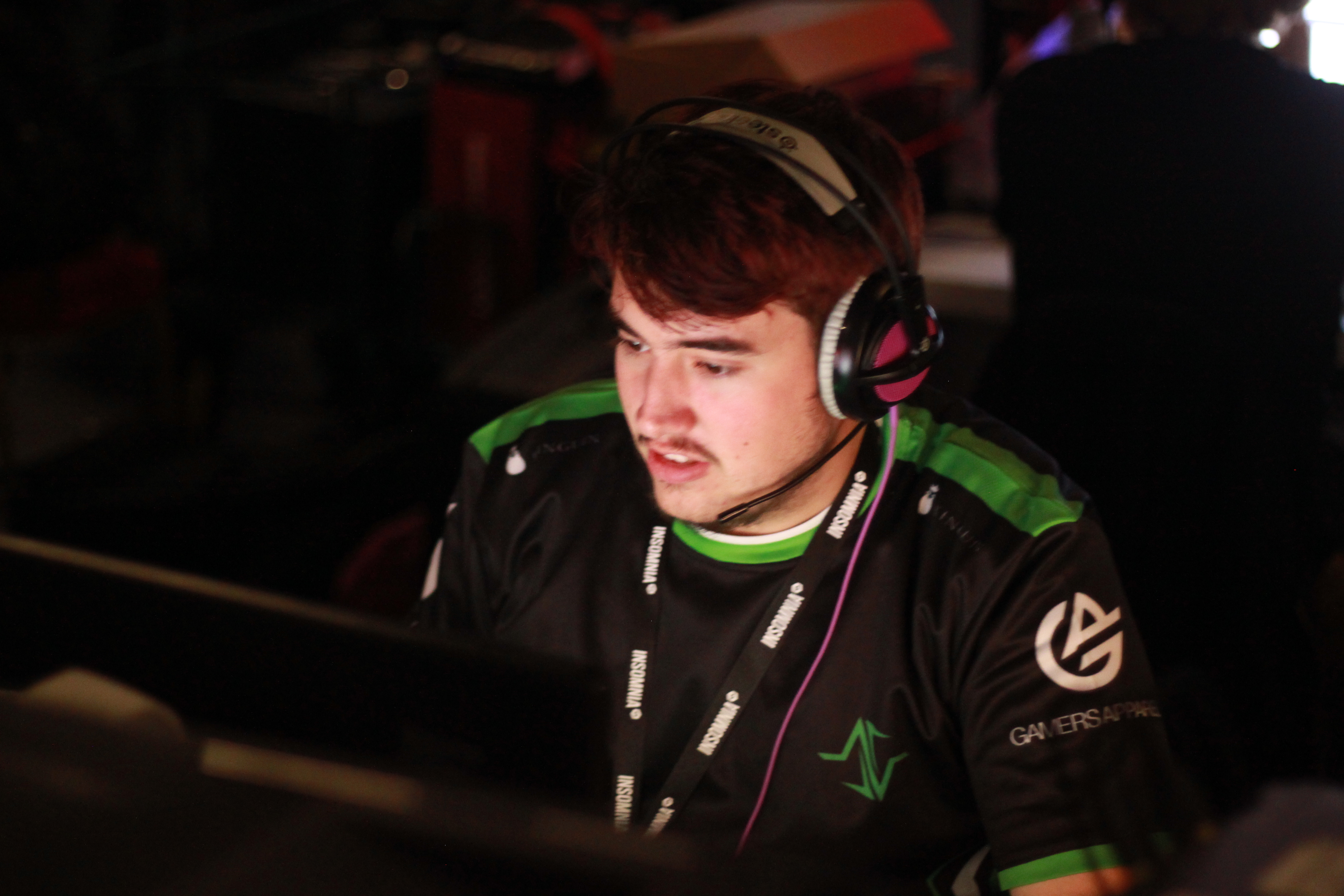 Impulse Gaming were the star performers this LAN (along with Dragon Esports).

And then there were four teams remaining. After a heavy day’s of Counter-Strike, this was where the real men were born. Team CeX Vs CAZ eSports kicked off the day and unfortunately for most people, it wasn’t much of a contest. Despite the fact that CAZ eSports made a last minute change to their roster ditching two players and strengthening their side to include Brandon “Weber” Weber and James “Kryptix” Affleck, they looked all out of sorts and kind of lost hope against Team CeX. Meanwhile CeX looked incredibly brilliant, and once again showed why they should be respected. It was a 16:8 & 16:2 drubbing in the end over de_train & de_dust2. This meant that Team CeX squared up to Team Endpoint, and were looking to secure a rematch with fm-eSports whilst Endpoint were searching for answers in the puzzle of how to beat fm-eSports later. The first map, de_overpass was incredibly close, and showed some real decent plays from either side, it also looked like that this series would go the distance too, the map finished 16:13 in Endpoint’s favour. However we were soon to be proved wrong, as Team CeX capitulated early in the second map, and couldn’t seem to get anywhere close to Team Endpoint, they eventually went down 16:7 on de_mirage.

This meant, that fm-eSports would once again play Team Endpoint in the grand final. Ian “Immi” Harding was searching for at least a first map win this event over fm-eSports, but once again, they seemed to have all the answers. It was a de_train play in the final, something we hadn’t seen in the five maps previous, but it was a similar storyline that developed, for everything Endpoint threw at fm, it was fm who had the answers. The map went to fm-eSports in a 16:13 win. Then we saw for the THIRD time this event between the two teams, de_cache thrown out there, and again, another heartbreaking story for Ian and co, as again they threw everything into the map, and fm continued to be like a brickwall. It means that fm-eSports won their 7th map on the bounce against Team Endpoint, they took de_cache 16:13 and thus took the double and insomnia59 title. Congratulations to fm-eSports who thoroughly deserved the win this event. 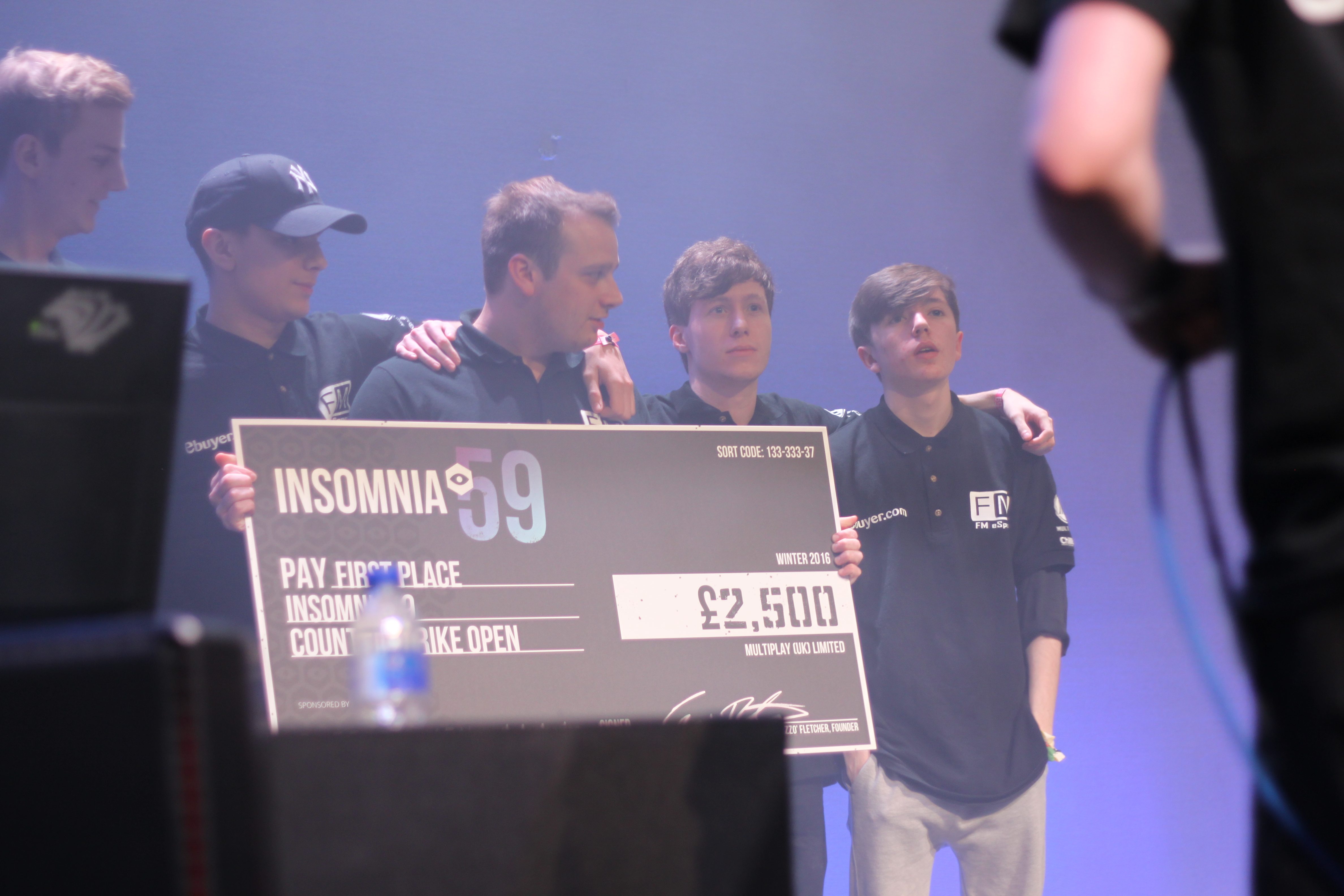 THERE WERE TWO STAGES OF GROUPS IN THE INTERS? Who’d have thought? So Multiplay’s Admin team managed to have three group stages this event, along with a new exciting format for the main tournament elimination stages. In the Intermediate Tournament, it went from 8 groups of 4/5 to 4 groups of 4/5 and then a single elimination bracket for 8 teams. It was cooL-Gaming who managed to overcome Odin eSports in the Intermediate Tournament grand final, meaning that alexdiniho, exitbb, kbull, andr3y4dnb, VLAD manage to secure free tickets back to insomnia60 in April next year.

After that brilliant weekend, the first UK LAN of 2017 will be epic.TWENTY on the weekend of February 16th – 19th, you can still book tickets here, with only 250 tickets remaining, you won’t want to miss out on another weekend of glorious banter and incredible Counter-Strike.