Opening proceedings would be Royals taking on Wind & Rain in a mid-table battle.

Wind & Rain began well on the opening T-side rounds but Royals managed to stay within touching distance on Mirage.

Despite the hot start from Wind & Rain, Royals managed to overcome the deficit and take Mirage 16-13, still keeping them in contention for a playoff place.

Prior to the game, ex-Endpoint player Luzuh would be playing for the Pensioners.

The addition paid off as the Pensioners took a strong lead on Dust2, ending the half with a convincing 11-4 lead.

Vexed started to close in and looked to take the lead but it was the Pensioners who held strong for a 16-10 win.

No cheeky double boost when @LuzuhCS is holding down the site! 🙅‍♂️#ESLPrem

Heading into Inferno, Fierce remained one of the two unbeaten teams in the Premiership while ReflexEU were still looking to get their first win on the board.

ReflexEU managed to hold strong against Fierce to keep the game level after ten rounds and by the end of the half, there was still just a single round separating the two sides.

Round 23 saw the game turn in favour of Fierce. A sublime shotgun play from Aleks broke the ReflexEU economy and ultimately spelled the end for ReflexEU despite another good showing.

Fierce took Inferno 16-12 to remain undefeated in the Premiership. One more win all but guarantees their place in the playoffs.

Rounding off the evening, Endpoint would take on Buzzkill on Nuke.

Endpoint looked the far superior outfit from the outset, earning a dominating 11-4 lead at the end of the first half.

With the momentum fully in their favour, Endpoint quickly closed out the game in the second half with a 16-8 scoreline, keeping their undefeated record in tact. 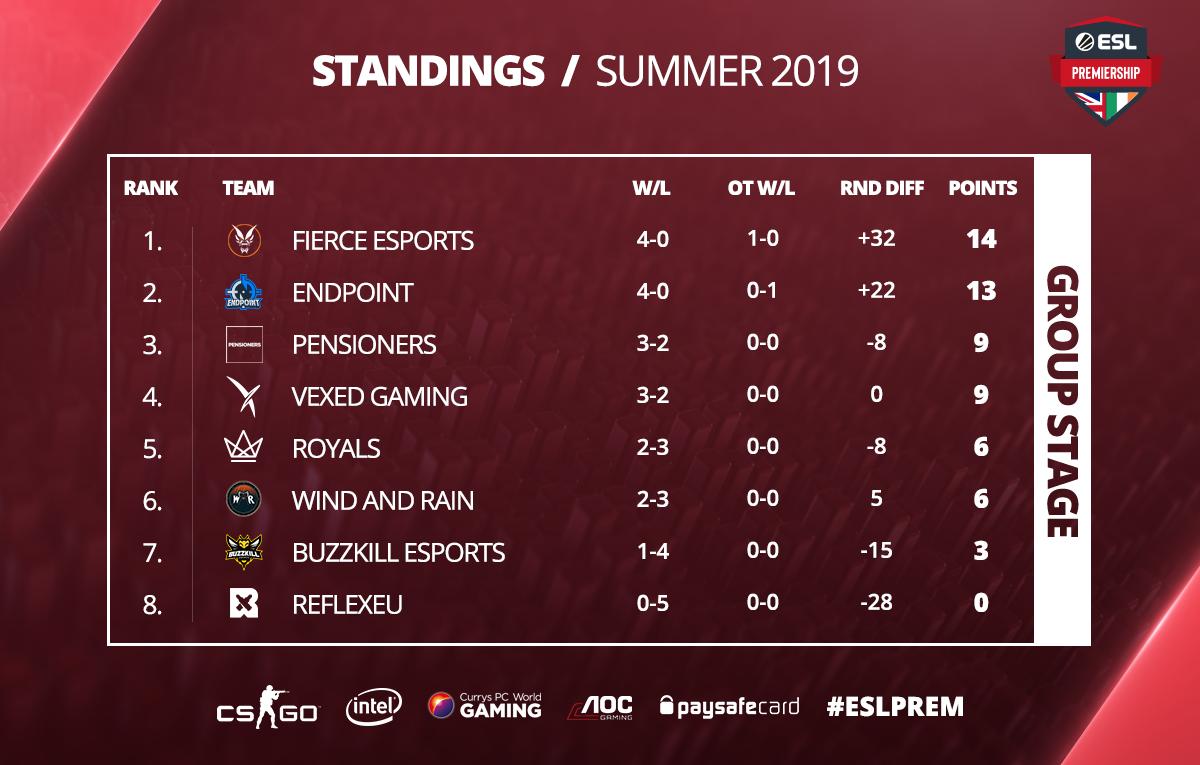 After five weeks of competition, Endpoint and Fierce remain at the top of the table as the only undefeated teams.

The mid-table is certainly hotting up, with Pensioners, Vexed, Royals and Wind & Rain able to move up the standings with a win while Buzzkill and ReflexEU hold up the table.

Keep up to date with everything UK CS by following us on social media: @ukcsgo